Although I’ve been retired for more than a few years now, I can usually find any number of things to keep me occupied and boredom is never a problem for me. Under the current circumstances though, the virus quarantine has kept me pretty much confined indoors, which, in turn, has made me focus more on my motorcycle projects. I have 3 CB77s in the works. This project has been in the forefront for some months now and I thought it might be a good idea to post my progress here, not only to keep track of the details, but to give this site a much needed injection of life.

The project began unintentionally in May of 2018 when I bought a lot of 3 engines locally for spares. In that lot was - you guessed it - a fairly complete CB77 engine from 1962. 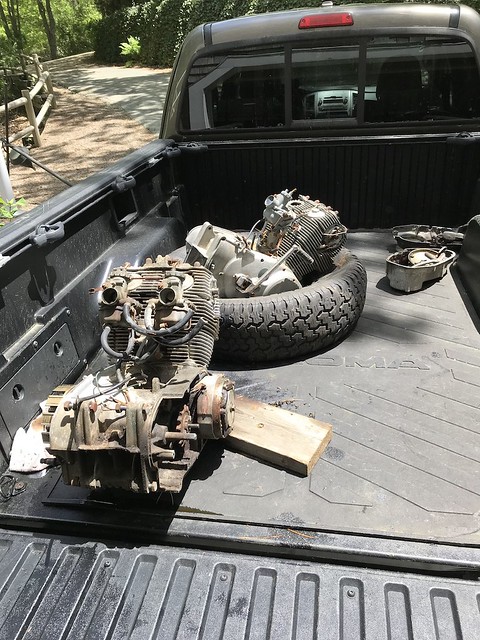 While the intention was to strip it for parts, the fact that it was the oldest CB77 engine I’d seen gave me pause. I decided to save it. Months later, I began looking for a ’62 frame with the idea in mind that I might be able to build a complete bike from it.

The hunt for a frame started in the “parts wanted” section here, but I also kept an eye on eBay. At some point, one showed up there. It was an engine-less roller with a title. Unfortunately, the seller was in Tennessee and didn’t want to ship or even entertain the idea of a shipper picking it up. After some correspondence, I let it go and the eBay item eventually expired.

At the urging of a friend who knew the story, I contacted the seller again in early January 2020. He still had the roller and was more amenable to the idea of a shipper picking it up. After some correspondence the deal was done, I found a shipper at a reasonable price and the frame was delivered to me a couple of weeks later. 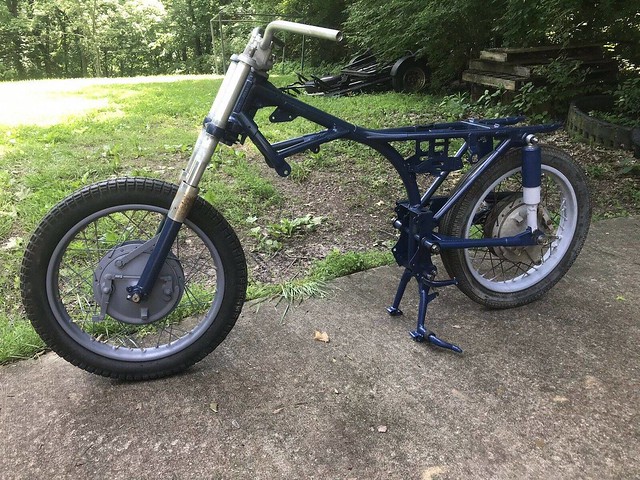 Unfortunately, the frame and engine numbers are not even a close match, with a difference of 2031 units. More on that later.

After receiving the frame, I began to sort through my spares. I had a good rear fender and a good, but very rusty early front fender. Unfortunately, not the earliest with the 3 rivet center brace, but the later 5 rivet type. Still, a good start. I began to collect other needed parts and, in order to save space in my small shop, I just mounted them on the frame temporarily – gas tank, fenders, etc. Smaller parts went into storage containers.

The bike, as it currently sits today. The temporary wheels are those from a ’66 project bike: 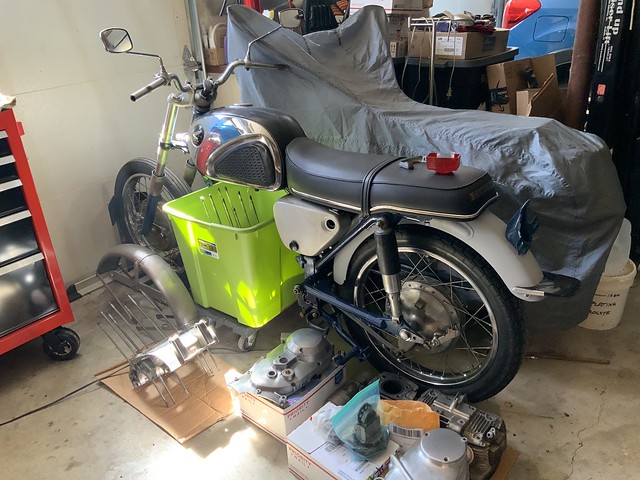 And yes, the late style lipped seat is from that ’66 project bike too and will be replaced by an early type seat with the passenger strap buckles. I ordered it from Texavina and shipped them the buckles from my stash. This photo is of the finished seat, which is on its way to me now. 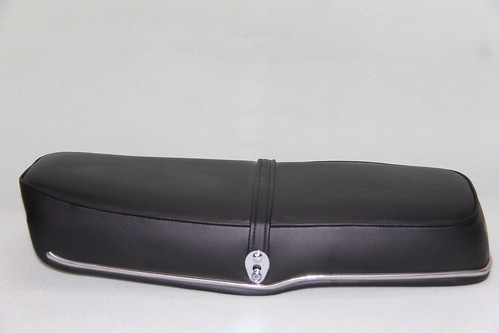 I started stripping and repairing those parts that needed it. The wheels were done first. NOS rims from my stash, new spokes, tubes, bands and Heidenau rubber. I set them aside in order to finish the brake plates. That sub-project is in limbo until I can buff the plates out of doors and gather a few more parts. The ’62 used the earlier style brake arms with lock nuts. Some of mine are in bad shape. 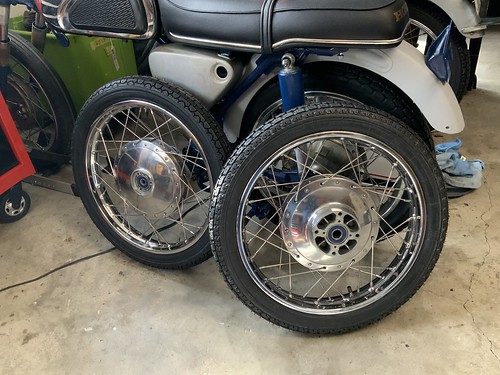 Interestingly, the frame came to me with the short early ’62 rear brake light. I’m told it’s a rare find and that it was replaced by the longer version that same year. The bulb socket is at an angle in order to space it away from the lens. Mine is in fair condition with a crack in the plastic and the bulb socket interior parts need replacing. Fortunately, I found those inner parts and after I re-plate the socket section, I’ll put it all back together. The shorter lens requires shorter mounting screws. It came with only one. The newer longer lens screws cannot be cut down because they are only partially threaded. It’s a small problem I’ll sort out eventually. 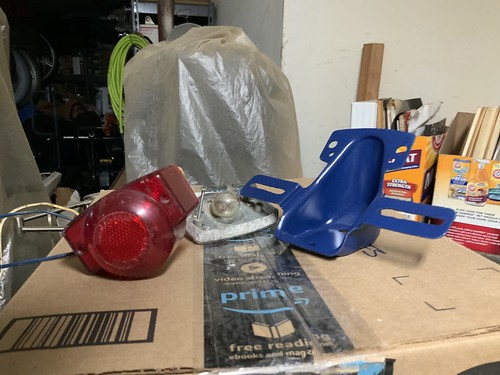 I’ll post more on this project in the near future to show the things already done, partially done or as they are undertaken.

As I mentioned in the first post, the engine and frame serial numbers are 2031 units off. Clearly not a close match. By lucky chance I just ran into another top crankcase for a '62 that lowered the difference to 75 units. Now that's much better. Less corrosion too. 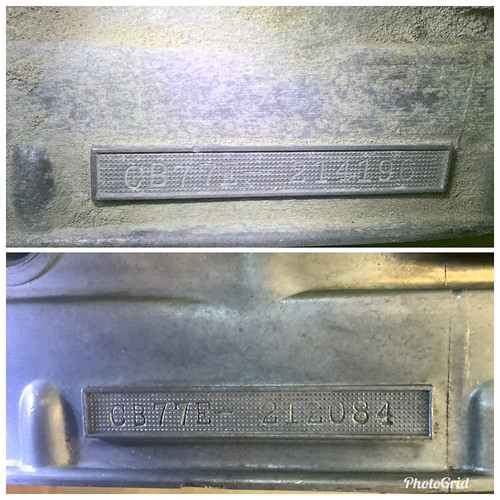 Thanks, G and Mcconnellfrance. Things are going slowly at the moment due to family matters, but I'm plugging away at small parts, getting little things accomplished as I can find the time.

I was able to clean up the new crankcase and remove the RTV sealant that some cretin had used all over the place and installed 4 missing studs. 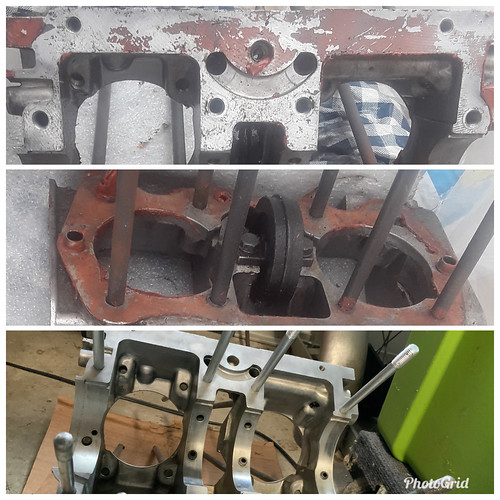 I also managed to clean up a batch of small parts that I found on ebay. Lots of good bits in that mess and worth much more than the $5 I spent on it. Most will go into my spares collection, but some of it will be used on the '62 after a fresh coat of zinc. 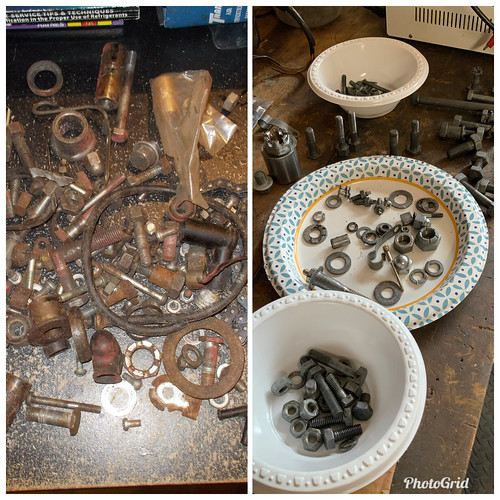 Along with he loose parts, I picked up a non functioning horn from the same seller. I took that apart, cleaned the contacts, de-rusted a few small parts, cut new gaskets and will paint it and put it back together as time allows. Unfortunately, one of the mounting bracket spacers is missing, so I'll have to make something up. I had to remove the contact points mechanism to clean them properly. What a pain to get that back together! I used little bits of dry sponge to hold everything together and install the screw. 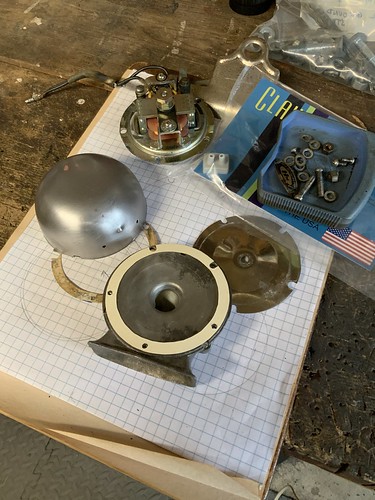 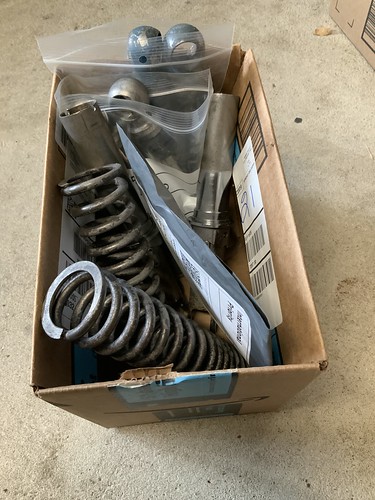 The rotor cleaned up nicely, but a new starter clutch was needed. That arrived yesterday; new screws are on the way. 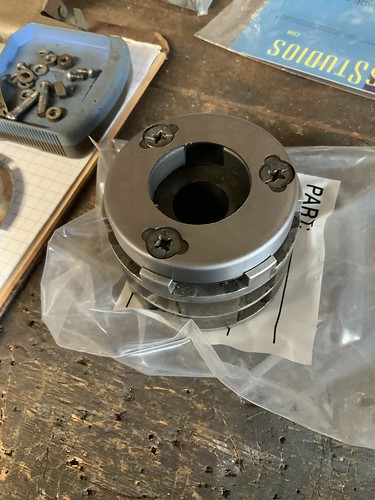 Now I'm half heartedly looking for the fork bridge for the early '62 model. I can find a NOS one at CMS for € 624.50 (!), but would prefer to pay a bit less. Anyone have one in their spares they'd be willing to part with? (photo courtesy of G-Man) 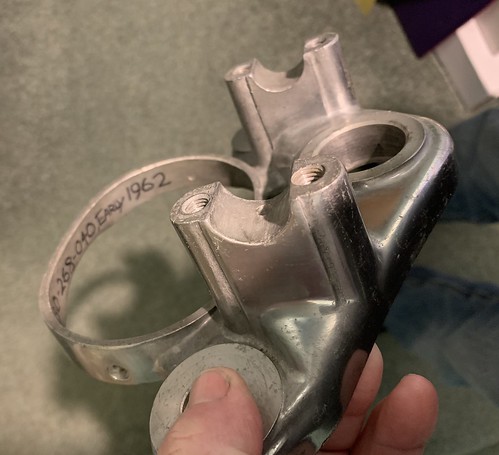 More as it happens, but things are slow right now.
Top

Are you still looking for rear shock parts?