Great story! Thanks for sharing that.

We spent a week in Norway in June but we didn't hear any Police Sirens!

Love the CYP77 Graham and the quality of the restoration.

Thanks - It's been really interesting. It has prompted me to build a white CB77. I have the frame and a close matching engine top case. Now I have to locate the other bits!

My great friend, Les, who has studiously learned the art of metal polishing, has a tame chrome plater in the City of Birmingham, UK.

He gets a one-day turnaround. If he takes items in for stripping at 9am, they are ready for collection at 4pm the same day.

The parts get taken home and polished in his workshop using a setup he designed and built himself using several grades of polishing wheels. The parts go back to the platers and get plated with copper, nickel and chrome in the space of one day.

Here is the most recent set of parts. 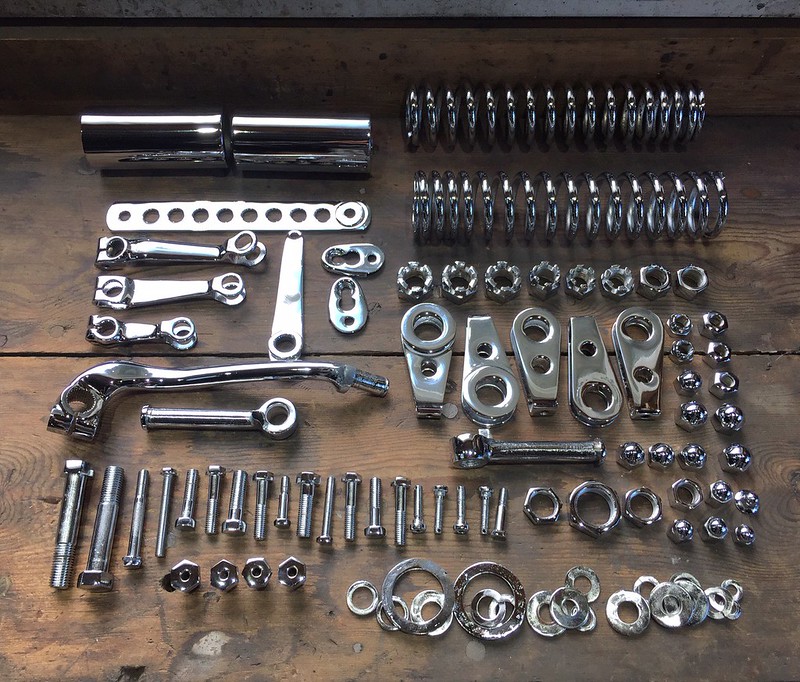 It's always exciting to unwrap all of the shiny parts but, yesterday, the most exciting parts were these super-rare cable adjusters for the CYP77. 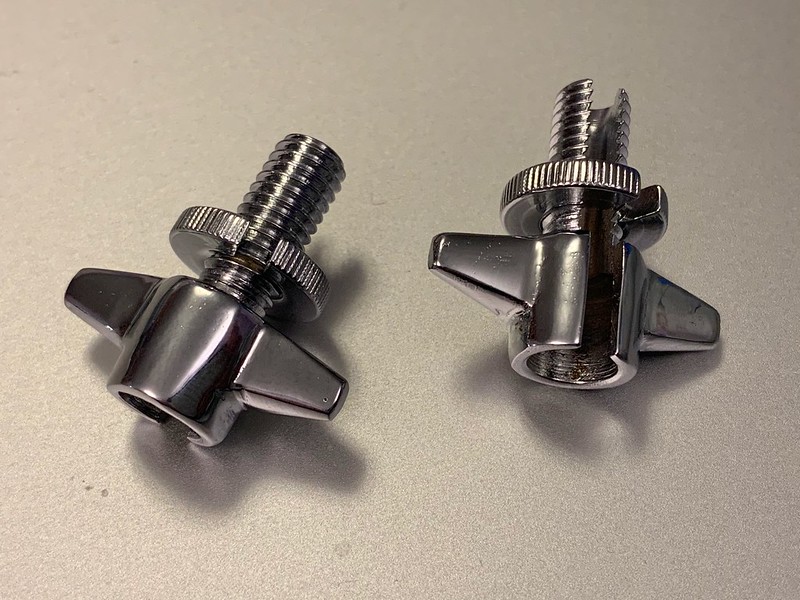 Wow, that is awesome in finish and turnaround time. Wish we had someone like that close to me.
Thanks.

We have two sirens for the CYP77 but neither of them are correct. Because this bike has the siren drive on the left side of the rear wheel the sirens are much harder to find than all of th elater bikes which drive on the right. 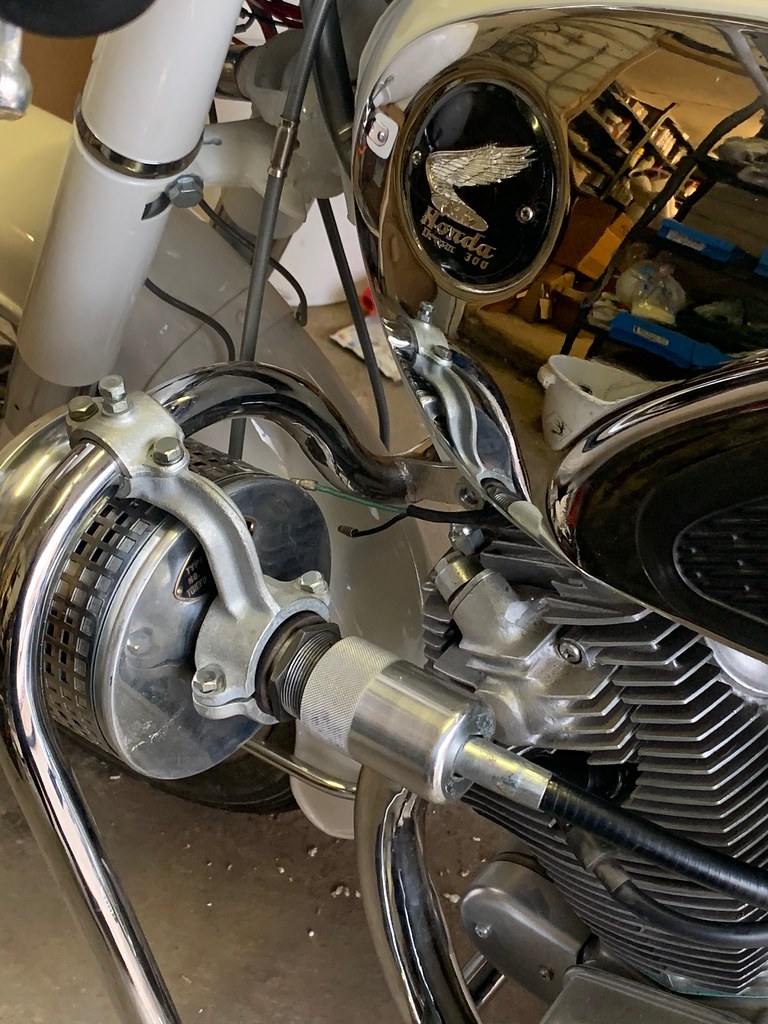 I worked out that it would be possible to drive a CB450 siren which appears to work the same whether driven in the forward or reverse direction. The problem is that the CB450 has an M10 left hand thread on the drive spindle while the CYP77 cable has a right-hand thread. By using a pair of adapters (inside and out) I think it will be possible to attach the mis-matched cable and drive.

I was looking for some tough steel for the drive shaft adapter and noticed that I had just done one of my kickstart gear mods. After a quick check it appeared that it would be just the right length. 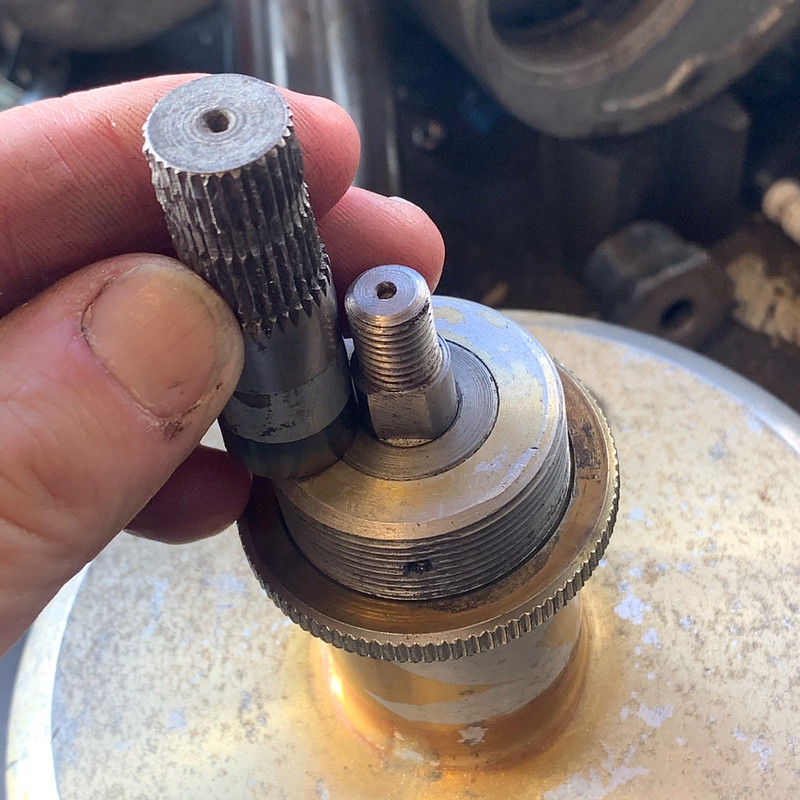 When I came to machine it, the spline end was still very hard so it had to be annealed to soften it. 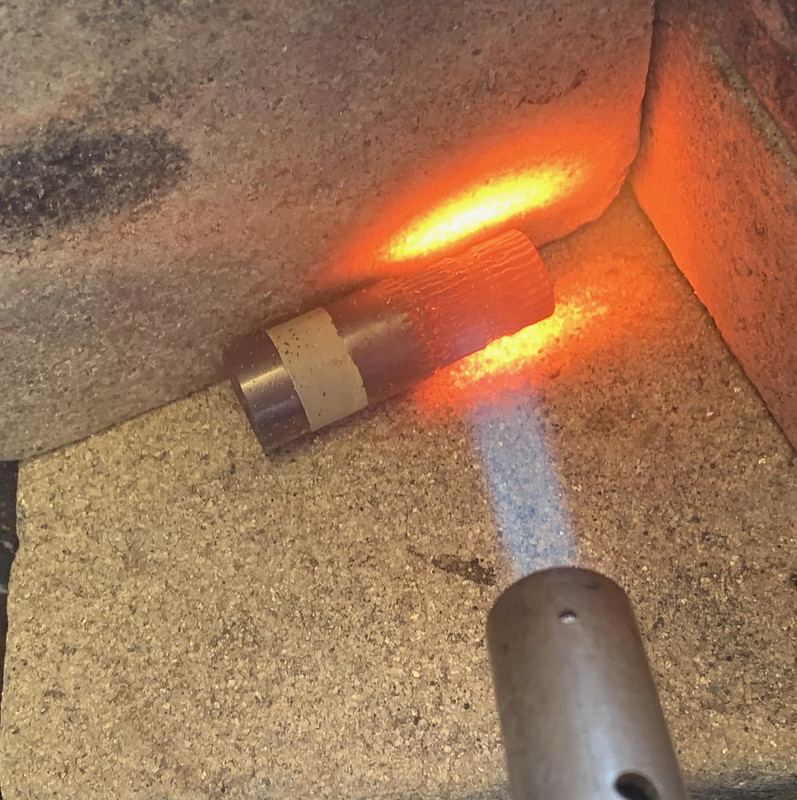 With that done I was able to start machining. 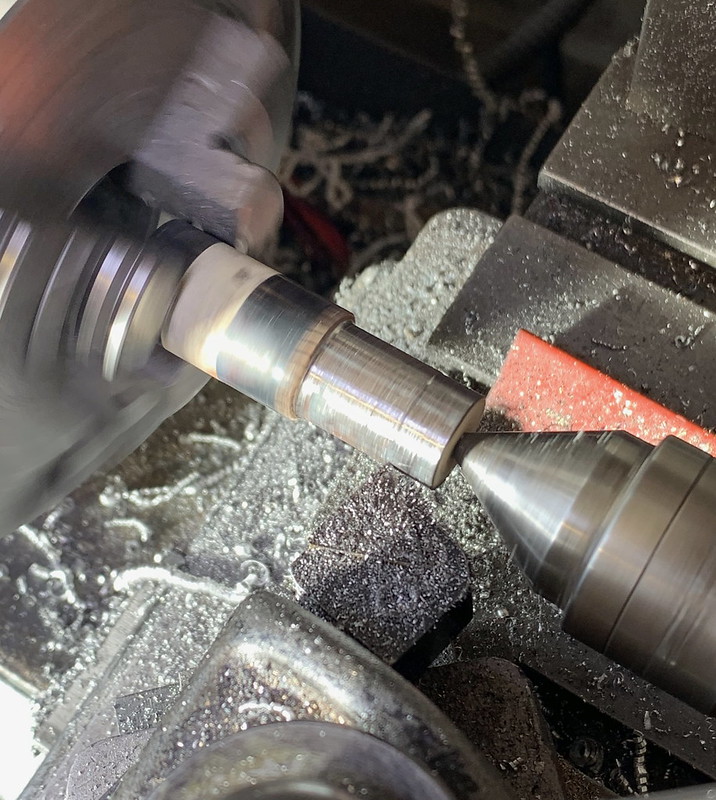 The adapter has an M10 right hand thread for the CYP77 cable and an M10 left-hand thread to attach to teh CB450 siren. 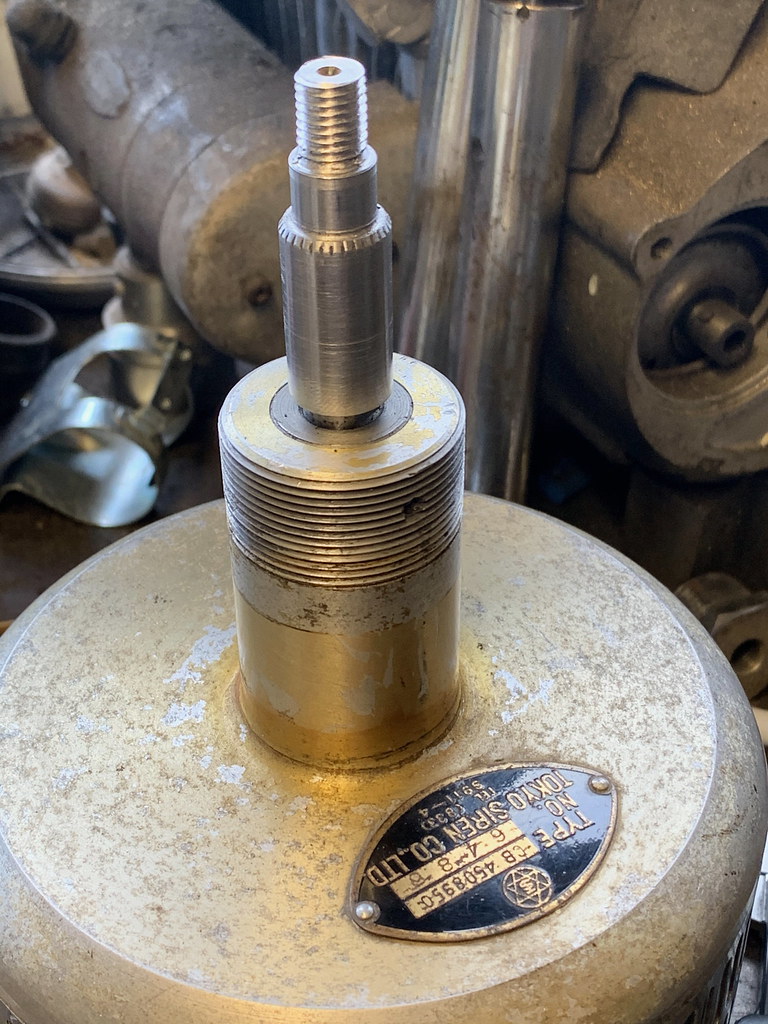 With that done it was on to the outer adapter which had M38 internal and external threads, both thankfully right hand threads. 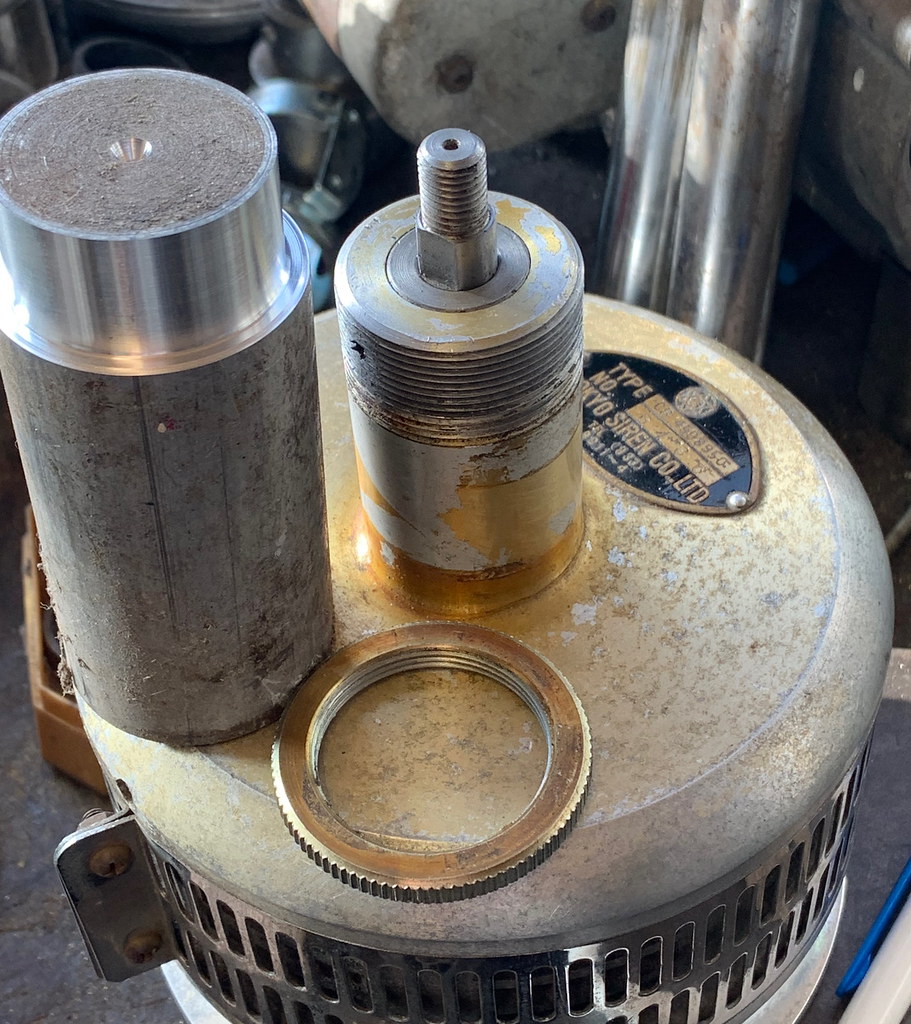 Using the inner adapter to gauge the dimensions. The outer part was set to length and bored to clear the cable, and the diameter for the internal thread. 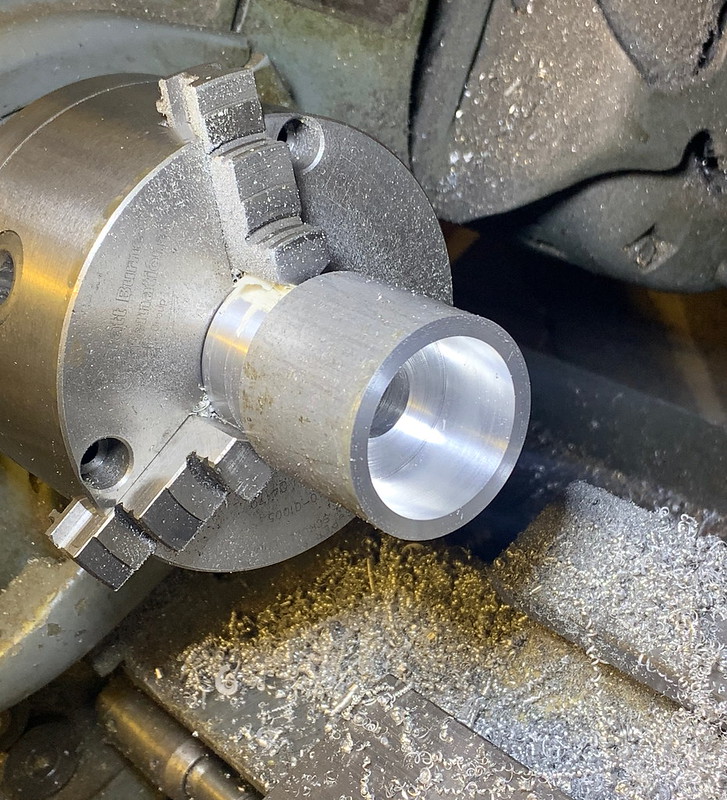 My Myford lathe is an imperial one so I have to put on the metric conversion kit which I have had for sme time but never used.

I got the lathe converted to metric using a special kit of gearwheels which, quite cleverly, allow me to cut metric threads using my existing gearbox. 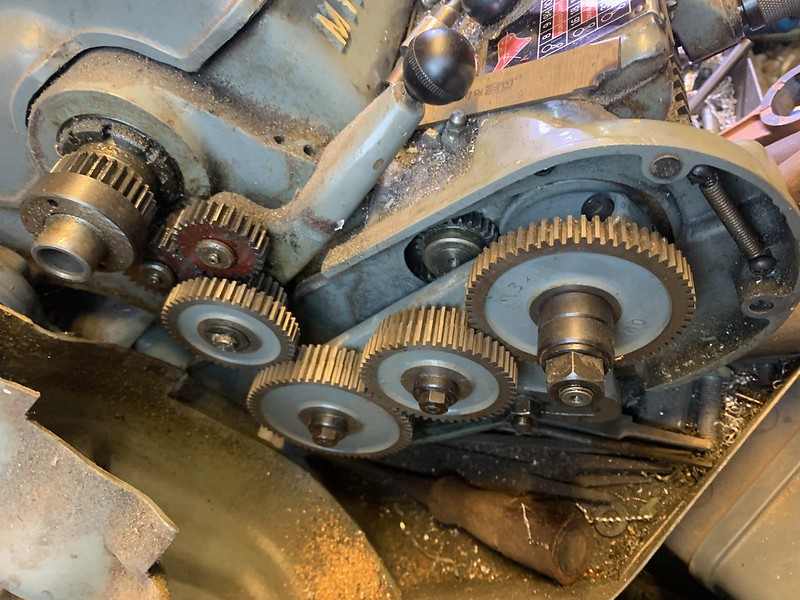 I was able to cut the M38 x 1.5 internal and external threads on the outer adapter sleeve.... 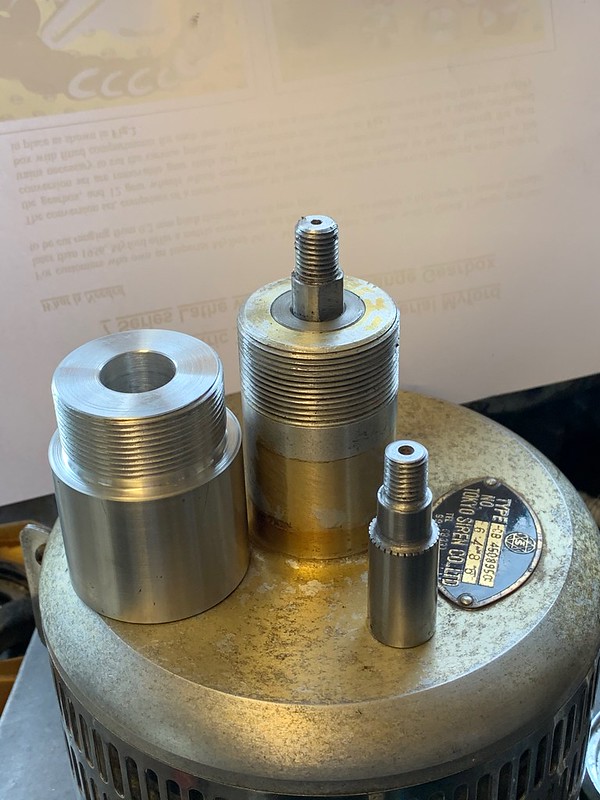 It all went together nicely. 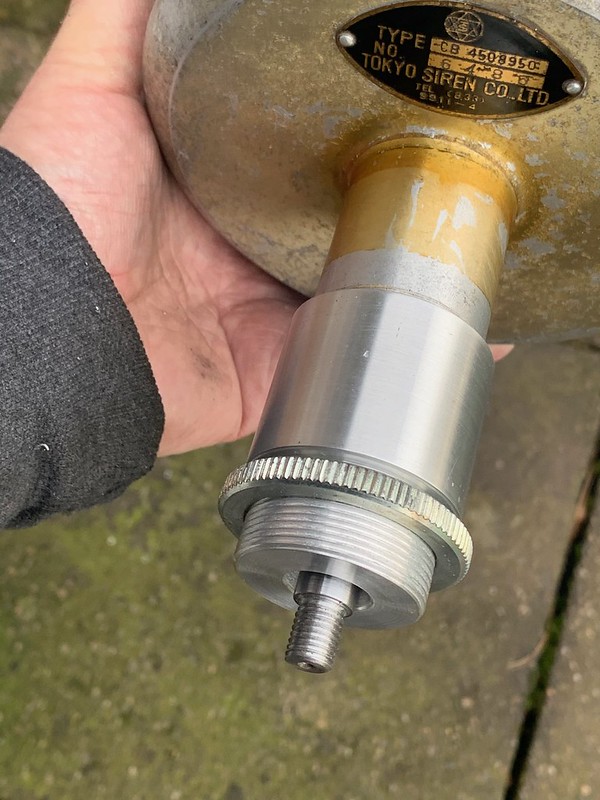 Next I had to add a couple of details to the drive adapter so that it would a) stay in place on the siren shaft and b) provide a means of tightening with a spanner. 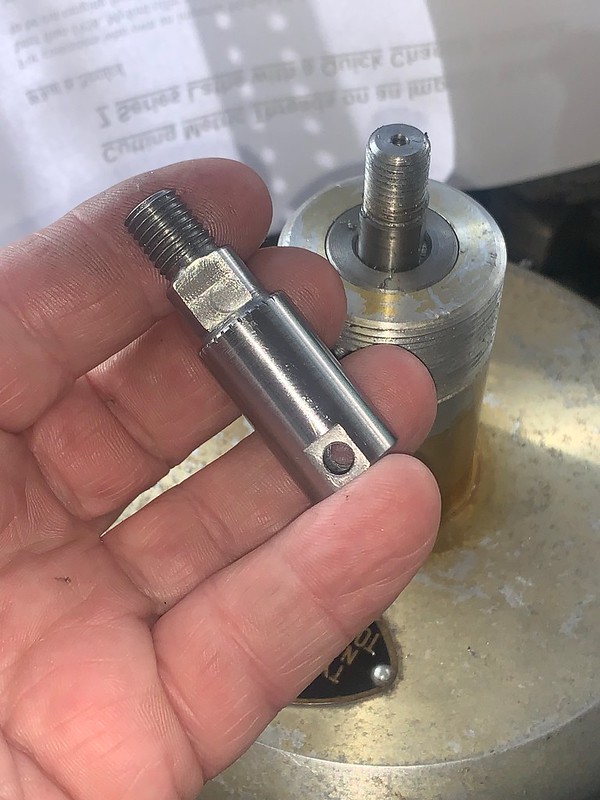 I've still got to put a 'diamond knurl on the outer part to match the original but I've had to order a new tool to do that.