Dad called me just after Christmas, told me they were cleaning out a storage unit full of my grandfathers old stuff and there was a bike I might want to look at in there. Got there and its a 66 cb77, best we can figure out its been there at least 40+ years or so covered up. Its not locked up but seems a little stiff. Its all there for the most part. I hauled it to my house, unpacked it and went about getting the paperwork strait. Just got the title in the mail on Monday.

Decided to clean it up today and clean the layers of dust and surface rust off to get a idea where to begin.

This place is a wealth of knowledge that I will need getting it back on the road.
Top

Welcome to the Forum!

When you get a chance, post some pictures, please.

Plenty of help and tips here to help you get it running.

I am trying to figure out how, I am not a computer guy :(
Top

I spent the last few days cleaning it up and putting a few things back together. I think its pretty complete, some stuff looks newer than 40 years so I think some work has been done on it more recently. Tank had about a inch of varnish in it, not a drop of rust though. Petcock was clogged with same varnish, as was the nipple on the tank for the crossover. Surprisingly the carbs are spotless, jets all clear and moving parts free. It had no fuel lines on it so I guess none of the crap got to the carbs. Both cylinders have 155 lb compression and it turns over fine. After filing the points it has spark on both plugs.

Anyway, I am going to get the wiring sorted and change the oil, the old oil looked like new but I had to drain it to get to the clutch plates that were frozen up.

Here is a picture of it cleaned up and all parts back on it. 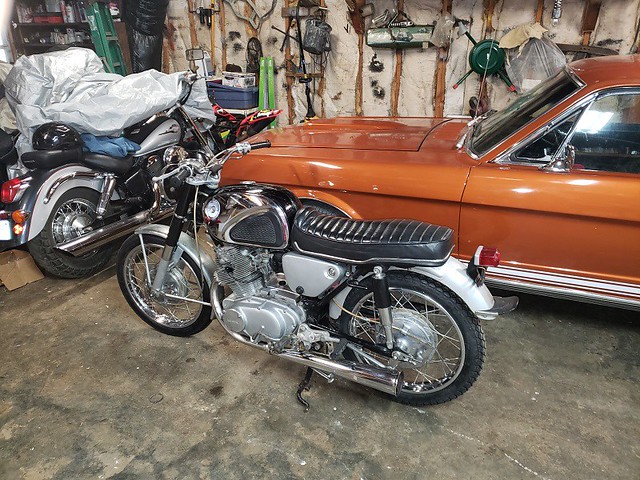 Wow, that is nice.
Thanks.

Stunning, like something out of a time warp, the storage environment has been kind too.

I hope you ride it and enjoy it the way I guess your grandfather did.
Top

I do not think he rode it ever, in reality no one in my family ever recalls seeing it before. He loved to tinker with things so I imagine he just picked it up to fix it, which would explain why it has some newer parts on it. I like it just like it is, and my plans are to get it running, fix what is broken on it and ride it like it is with all its character.
Top
Post Reply
17 posts